Now the really fun part. With only long week to go, I had to come up with costumes and finished characters. Early on I established that I needed The Thief, the Princess, the Magic Carpet, the Evil Handmaiden, the Evil Mongol Prince, and maybe some common people.

The Thief of Bagdad story is basically the Aladdin story we are all familiar with. Here the Thief tries to return something to the Princess he stole before he steals her heart. Without sound, the actors had to evoke every thought and feeling in their face and exagerated gestures. Make up and costumes were very much a part of this.

Once the city was pretty much done, I knew at first what the Thief would look like on the flying carpet with his Princess. I actually took this photo from the movie as a screenshot as they flew along the city scape. How can you smile while flying through the air 40-60 feet above the ground by wires?

The carpet was also a character in this scene, but look at that smile through her veil. No wonder Julanne Johnston was considered a great actress. Doug (the Thief) is magnificent in that cape---oh how I wanted to know the colors of this scene. I imagined the carpet in reds, her in blues and him...I had no idea.

In 1924 there was no such thing as color film, but there was color printing---and this cardboard cutout for the theatre was done in gorgeous color. This is where I took my inspirations from. Everything revolved around that cape. 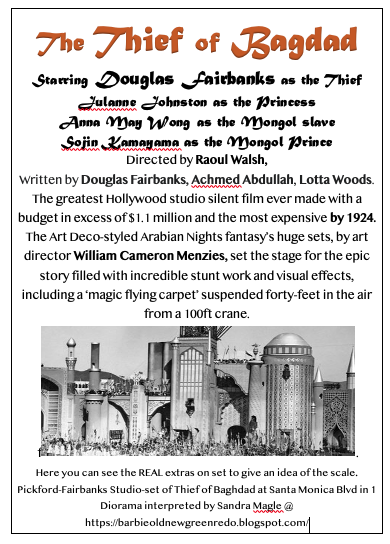 NOTE: Photos in this blog series from the actual movie and photos from the sets are from various movie sites: TCM, Books, Blog articles, Pinterest and the Internet in general. My apologies for not siting exact locations. I did research for months and simply stashed images and did not keep a record of the sources. Apologies to all sources, I will be happy to give credit.
If you enjoyed this post(s), please join me by email- at
FOLLOW IT---upper right hand corner.
I have not been paid or reimbursed in anyway for my opinions or products shown, or from where I shop.
Please Join me at these Fine Blog Parties!
Please do not use my photos without linking back to this blog without my permission.

Vickie's Finishes Setting up for Fall: Part 2 At the Bijou 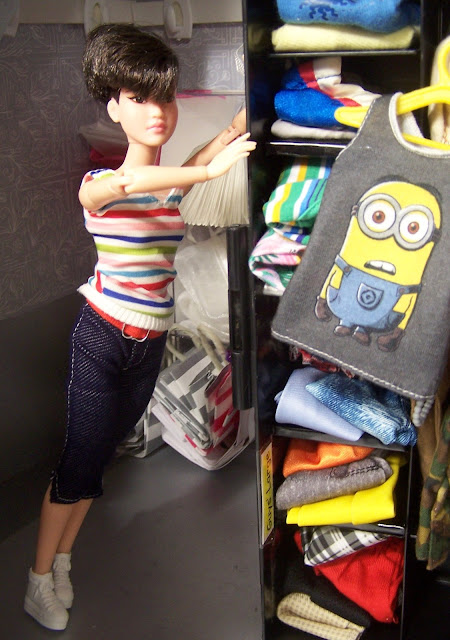