Sandi BL (Groom's Mom): When your done, Todd, you can rub mine, please (chuckle!)

Todd: Well, I don't have four hands, well I need one more to hold my beer.

Sandi: Look, they are putting out the cake.

Mulan: Oh, my it is gorgeous---just like Richelle wanted.

Sindy and Jamie from the Patisserie in the GrandView just brought in the cake.

Jamie: I'll go get the coffee ready to serve.
Sindy: Thanks, I'll get them to start their photos for the cake.
Monnie: That looks delicious!
...I think that is just what she wanted.
Todd: MORE photos...I'm glad I'm not paying for that... .
Sandi: Oh, the kids sure look so cute...!

Ryan: So what do we do...now?
Richelle: Well, we hold hands and cut the cake together and then we feed each other a bit from the first piece.
Richelle: Now you have frosting on your cheek!
Ryan: You have some on your nose...gosh, I love you!
Richelle: I love you, too.
(music playing "A thousand days, a thousand days...")
Monnie: It's almost over, how about one more dance, Honey, without my shoes!
(The band kicks up a fast one---and the younger bunch give it a go) 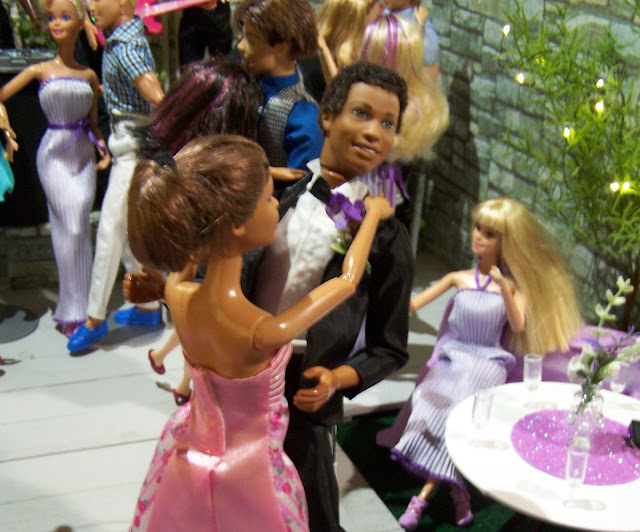 Carly joins Bestman, Jeffery.
Richelle and Ryan can swing with the best of them.
Ryan whispers: Want to leave soon...?
Richelle: Definitely...now?
Jeffrey: I think the happy couple is trying to sneak out.
(The band switches to a slow dance, and couples pair off)
Lucas: Thank you everyone for being such a great audience. Last dance Call.
Everyone joins in for the Last Dance
Ryan and Richelle sneak out...
The Wedding is over...I sure hope
everyone had a good time!
Author's note:
After 18 months of not having family gatherings,
(my dolls' world, too.), this wedding was so much fun to do and share. Thank you for all your comments and encouragement.
I'll still do a few tutorials...but this is the end of the wedding. Everyone will hopefully enjoy the memories. I hope your dolls and real life can enjoy some normalcy now.
Thanks for viewing and feel free to ask me any questions or inquiries. I'll be doing a tutorials on the StoneWalls venue and the wedding particulars, soon.
If you enjoyed this post, please join me by email- at
FOLLOW IT---upper right hand corner.
Please Join me at these Fine Blog Parties!
Wonderful Wednesday
Friday Favorites
Metamorphisis Monday
Please do not use my photos without linking back to this blog without my permission.

Always Ad-Free Blog
Wedding Reception: Part 2
Ryan and Richelle go over the rest of their wedding photos online!
Richelle: The drummer, Jimmy, was so cool.
Ryan: Tres told me he is going to be a backup for the band members. He was so excited.
Richelle: Jacquie (Tre's mom) said he's killer on keyboards and plays guitar and drums. So that would be perfect. The band was so good.

Richelle: Everyone was there from the HFIM house. I hope everyone had fun. The lights in the trees were so romantic.
Ryan: Even Dr. Ken came back---he looks great. He said he was on vacation for three whole weeks before he starts his residency at Northwestern. So we will see more of him now, that he will be close again. 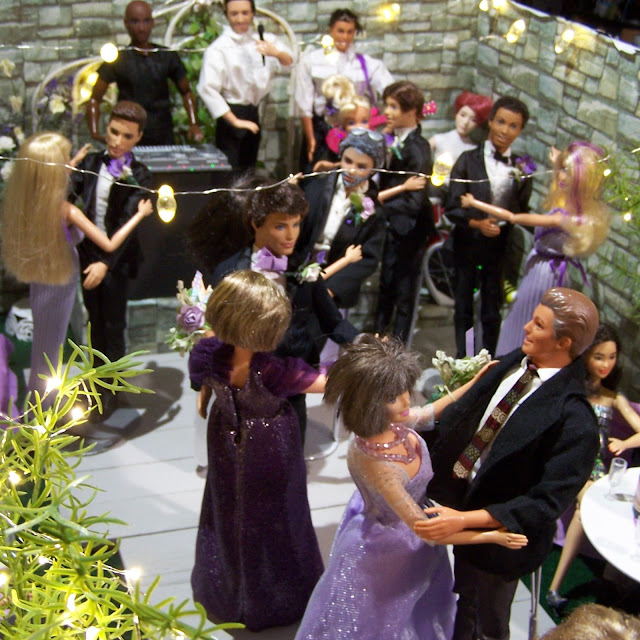 The bridal party dance was so much fun, we all changed partners.
Richelle: My mom was so gorgeous!
Richelle: That's Dad right before dipped me...he was sure in a crazy mood.
Ryan: Another great shot of the band!
Barbie and Richelle's brother, Rocky.
Bestman, Jeffrey, and Maid of Honor, Lily.
Ryan: Mom and I having a spin around the floor!
Richelle: I think everyone had a good time! And, 11pm was a fine time to end, I was exhausted.
Ryan: Joe and Jamie were so great to volunteer their services. And, Patricks' bar was perfect for our party. He made sure everyone had refreshments.
Richelle: Those huge bottles of champagne...where did they get those???
Ryan: That was your dad...! I know it was a lot of champagne.
Belle and Ian
Richelle: I'm glad they put the extra dance floor out...there was room for everyone that wanted to dance.
Ryan: I wonder where the cake photos are??? Must still be more coming!
Thanks for viewing and feel free to ask me any questions or inquiries. I'll be doing a tutorials on the StoneWalls venue and the wedding particulars, soon.
If you enjoyed this post join me by email- at please
FOLLOW IT---upper right hand corner.
Please Join me at these Fine Blog Parties!
Inspiration Monday
Metamorphisis Monday
Friday Favorites
Please do not use my photos without linking back to this blog without my permission.

Blogger has eliminated their "Join by email" option as of July 1, 2021. Please take some time to rejoin my blogs via email from

You don't have to opt-out of other services. But, you have the options of only receiving blogs/sites that you choose to hear from.

I've never asked before---but, so many bloggers on google/blogger/blogspot are loosing all their followers. Please make sure you support your favorite bloggers, or the blogworld will change forever.
I've always tried to be faceless behind my blogs---but I'm a real granny, a retired artist, collector of antiques, and odd stuff and I play with dolls!

never have ads or newsletters. I work very hard for content suitable for any age. I never send additional emails about the blog or use any of your information in any way, except to ask you this one time to please join via the new widget

FOLLOW IT
in the upper right column.
Please Join, so you receive one email for each of my current posts that you subscribe to.

HUGS, and Thank you, so much!

Thanks for viewing and feel free to ask me any questions or inquiries, and I will get back to you.
Please Join me at these Fine Blog Parties!
Anything Goes Saturday
Inspiration Monday
Metamorphisis Monday
Please do not use my photos without linking back to this blog without my permission.

Ryan: Looking at our photos, online is great!

Richelle: It seems like a dream, and then over in a flash.

Ryan: Oh, it was great Aidan was serving, and Jamie made a great bartender. I was surprised your dad picked up the tab.
Richelle: (chuckling) Being from Wisconsin, he was convinced there wouldn't be enough beer if he didn't have control.
Ryan: And, Joe made sure the minors were not imbibing.
Richelle: Well, Tres was with coach Nemo right there! Tres's bucking for a scholarship in one more year at Northwestern. WooHOO! Go Wildcats!
Richelle: I didn't even see Russell, where was he sitting?
Ryan: I think back by the bar. Really nice that he came, he's been such a great contractor for your projects.
Richelle: I love this one of the girls, Lara, Barbie, and Lily.  Putting the bouquets in vases was such a good idea of Trish's.
Ryan: That overhead camera sure gets some great shots! Here goes your dad, he was a riot!
Richelle: Well, Daddy likes you...or he wouldn't make fun about you!
Ryan: Well, the comparison of me and a 'buck in heat', wasn't exactly flattering.
Richelle: I'm glad Mom pulled him down, and kept him under control.
Todd: All I said was....
Monnie: Shush!!!
Richelle: At least cousin Ray behaved himself, thanks to his sister, Michelle. They are both going to graduate school here in Fall.
Ryan: Well, it will be nice for you to have some family here!
Ryan: Jeffrey made a great speech, what a guy! He's my best pal!
Richelle: I like he told the story about your socks. (Snicker)
Todd: What about my socks...?
Ryan: My boss and his secretary.
Richelle: What is it about older men...picking younger women? You aren't going to throw me aside like alderman Dempsey did his second wife.
Ryan: I think Rehyna is the brains of that couple. She's really sharp!
Richelle: Ms. Barbara M Roberts, it was really nice she came. She was thrilled with the StoneWalls venue. Hopefully she will keep me on her other projects.
Ryan: Of course, you have increased the value of her investment, many times over.
Richelle: It helps she and Lara have such good taste, and deep pockets to do things right. I never planned to be doing rehabs and remodels.
Richelle: Everyone looked so nice. It was nice to see Dr. Ken. He's so much thinner.
Ryan: I'm glad he made it through Covid, I know he worked constantly.
Ryan: Mr. Pittman looked like he had a good time.
Richelle: I hope so, he sure has made all my designs work for the projects, one way or another.
Ryan: That's a great photo of Carly.
Richelle: So when is Jeffrey going to pop the question?
Ryan: Huh? You didn't hear anything from me...!
Richelle: Vickie and Zoe in Pink. I hope they had a good time...they were so great getting the whole wedding party ready. I loved, still love my dress.
Ryan: The band was great! That Gerard can sure play the keyboards.
Richelle: Manny sang every song on our list!
Ryan: Lucas was amazing on the guitars...I wish I could play that well.
Richelle: It sure was such a wonderful night! We still don't have the cake or dancing photos, I guess they will show up tomorrow, maybe. It will be hard to pick what we want, these are all perfect!
Thanks for viewing and feel free to ask me any questions or inquiries. I'll be doing a tutorial on the StoneWalls venue, soon.
Please Join me at these Fine Blog Parties!
Vintage Charm
Friendship Friday
Friday Favorites
Please do not use my photos without linking back to this blog without my permission. 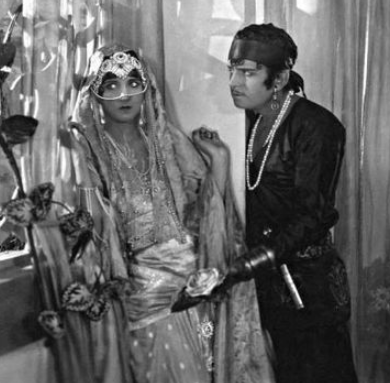