This really is an Ad-Free Blog

(Vickie's online commercial for Vickie's Vintage in my Doll World!)

Hi, all you gals out there that are sick of snow! It may be cold and white outside,


but here at Vickie's Vintage we are ready for those warm winter vacations and your most special events.


Is a wedding in your future? Come on down and take a peek at our selection of bridal wear.

Look at this designer sample---in cream, perfect for a second wedding.


I'm Carly and here to help you for your vacation needs as well as any formal events you have on your winter calendar.


This is Zoe, downstairs at Vickie's Vintage.

Fresh new sportswear fills the racks and look at this great beach dress.

We have a great selection of Designer samples of swimsuits and sportswear, all sizes.


Great prices and friendly service...and OMGosh do we have


And a full range of accesssories. Don't you just love this beachwear.


Hats, purses and all the summer wear ready now.

**PS...Nothing is really for sale, this is a fictional story, sorry!**

I will try and respond to every comment and answer every question.

Saturday, Lara pokes her head into the Hotel,
to see the current progress.

Lara: Hello, Mr. Pitt. Is it okay if I come  in and look around?

Russell Pitt (foreman): Sure, Miss Roberts. We just laid the subfloor, the crew is gone. I was just checking some plans for next weeks work schedule.

Lara: Oh, WOW! This is amazing it adds almost a foot and a half to the ceiling height. And it looks like you have started on the upper level, too.

Russ: Yea, really opens up the space. We have the column supports in, also.

Lara: I can't get over the height difference. I don't feel like a giant anymore, even though I am tall. The bakery renter, will be ecstatic. I've signed up three tenants for these lower spaces.

Lara: Including my little office which will be here.
Looks like I will have to do a built-in desk, and I could have a table top all the way to the window, and storage below....perfect.

Russ: We still have to reopen the atrium back wall, but all the demolition is done upstairs and downstairs. I'll take you upstairs, now that all it is all cleared.

Lara: Wow, the space looks great! I can visualize the railings. And now the floor is level with the elevator. Much better.

Lara:That will be wonderful to add natural light to the apartments.

Lara: Somehow you got rid of the bathtub. This smaller apartment looks big now.

Russ: The subfloor goes right over it. Too much hassle to take it out, was cemented into the beams. Now, it's a good-sized space.


Lara: This side is a bit bigger, hmmm, I will have to choose one of apartments for me, I guess I will wait and see which is leased first. The plans I saw, showed a full bath. I could put the bed here. I wonder where the closet will go?

Russ: I'm waiting for the next set of plans for the electricians and the plumbers. It's going to take some time before you see any more major progress!

Russ: Stop in anytime you see lights on, I'm usually here late to plan for the next day's work. Monday the electricians begin and Wednesday the plumbers will start. Tomorrow, my guys begin on the atrium back wall. Original 1892 plans filed with the city--show an unusual space behind there, so we will do an exploratory.


Lara:I never thought of this building as an archaeology site. But, I suppose it is. Thanks so much for the tour. I hope to see you next week.


I will try and respond to every comment and answer every question.

The last of the demolition in the Hotel begins today. Russel Pitt, the foreman, has a large crew of seven guys working on the hotel. He scans the plans and makes  a decision.

Russ: This is a big list of removals we have to do here, today. Let's have three guys start upstairs and get everything removed. Jake, you take Pete and Larry up stairs.

Remove the bed, built-in side tables and have the new guys work on getting that tub tiling removed, and those blue railings have to go---take those up easy, they are getting reused!

Jake: (up-left) We already have those side tables out---this bed is bolted to the floor. No way to get at it, other than break pry this thing up. Don't know what damage it will do?

Larry: You push and all pry up, okay?Together.


Larry: Wow it popped up in one piece, great! Such...it's really icky. We have to get that cleaned up.


Russ: If it is in one piece save it...for the recycle pile. Get the faucet, too. That Art Deco crap is always good for resale.


An hour later the team has the upstairs all done, the area swept and clean for tomorrows new floors.


Russ: Alright! Get your butts down here and get this stuff out to the alley. We still need to get the main floor removed.

Max: (blue helmet, peering under the floor) Can't figure out what is still holding this down, Boss.


Max: I'll move this bed outta the way---and see if I can crawl under there.

Russ: The specs say there's a couple of cement piers under there at the stairs. Get the jack-hammer going, and blast through it.

Max is the biggest and strongest guy on the team.

Max (yelling): This baby goes through this stuff like 'budder'! Hey guys, we still need some help over here!

Vince and Craig have been working on the ceiling beams. They are cutting the last one.

Craig: Hold that end steady Vince, will ya? Cutting now! Zzzzzzzzzzzzzzzzzz,! That's it. Let's stack them up over in the back. Okay, on our way, Max!. 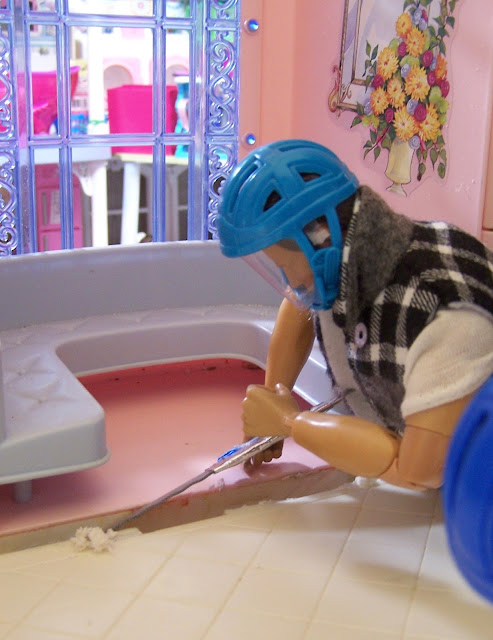 Craig uses a massive hack-saw to get at some bolts under the seating, where they are removing the old floor.

Craig: Almost ready for you over here Max. I can see it shifting. Give it another shove Vince.

Vince uses the giant pry bar at the elevator.

Vince: Okay, yell again, when you want me to pull again on this thing!

Max: Just another few inches and this side will be loose. Hold on! Pry now, so I can see what I'm doing! Got IT! it's loose, now

Russ: Okay guys, this is going to take every one of us. Get your pry beams ready. We lift in three stages. first to the supports.

Larry: I'll shove that beam under there when we lift.

Peder: nu samen, goed (all together good)
The huge piece of flooring, beams and all rises and clunks down on end!

Russ: AAaagh....take a breather...before we move this out to the alley.

They wedge the floor on some wheels and move it out!

Russ: Good day's work! Time for a break...take a load off! 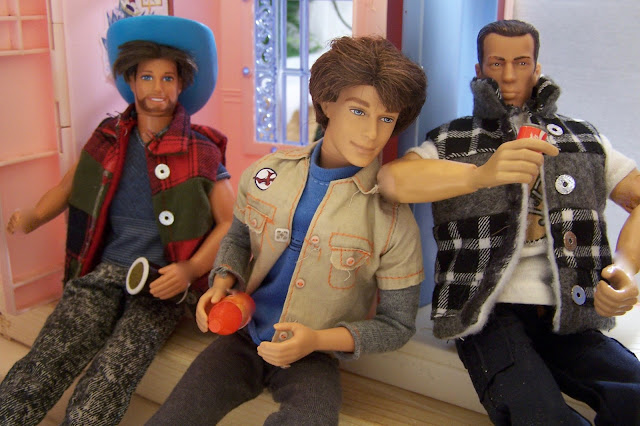 Vince, Larry and Craig sit on the new threshold.

Peder has juice and cheese.

Lots of jokes, fooling around, and food! Isn't that what guys do best?

Russ: Tomorrow we set beams for the ceiling, shore up all the pillars, make forms for the concrete, and get the second floor laid. Lots of fitting pieces, so work in pairs. Larry and Vince you set the beams, and I'll help with that.
Breaks over, let's get all the gear in the trucks and everything cleaned up.
Good Day's Work Team---Thanks!


All the opinions and photographs in this blog are my own. I have not been paid or reimbursed in anyway for my opinions, posts or any products shown or anywhere I shop. 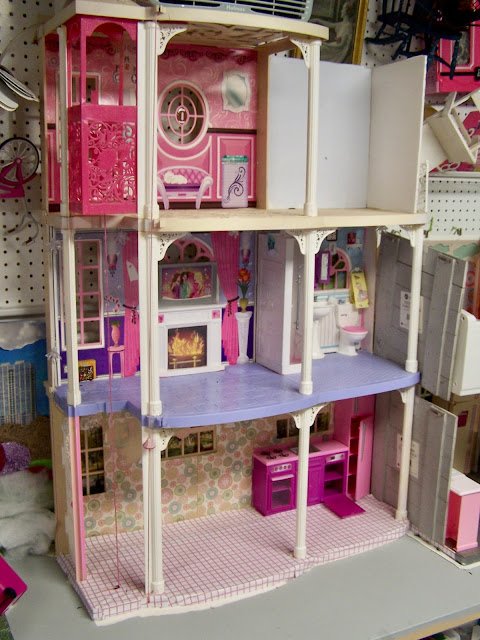