AD-Free Blog
First of all, HI! dear readers, I've been gone for a bit. The reason is this diorama and my attending the National Barbie Doll Collectors Convention at Rosemont, right here in the Chicago Area. It was 5 very long days of volunteering (my Windy City club was a sponser) and having so much fun. The "Decade of Destiny" was aimed at all of the innovations in the 1920's.
My entry for "Thief of Bagdad". (*spelling intentional as it was in 1924)
I so wanted to enter the exhibition/competition, and choose the category, "Scene from a Silent Movie," in the 1920's. At this stage of his career, Douglas Fairbanks was in his early 40's and co-owner of Pickford-Fairbanks Studios in California.
Silent movies were at their peak---as was his career, and he was bound and determined to produce the largest/longest/best silent movie adventure that had ever made for the silver screen.  Here is a shot of the enormous sets, and you can see the scale with the extras standing in front.
The movie itself holds up today and is 2 1/2 hours long,  it is the Aladin story with elements taken from Arabian Nights. Fairbanks also worked on the script so he could get everything just the way he wanted to thrill his audience with multiple special effects.
All the photos I could find were from the movie itself are in gray-scale. The intricacies of the designs were really mind boggling.
This is the only 'color' photo---a copy of a cardboard cutout probably used in the lobby of the movie houses.  I had to capture his exuberant personality as well as the scale of this monumental movie, and that cape...closeups later on that.
This was a bit tricky in 24"x24" with unlimited height. Of course all dolls are Mattel, and I'm happy to say only one was new and the rest were 'rescues'. I wanted to feature the flying carpet---a special effect that was completed with a hundred foot crane flying a carpet with the stars on it 40 feet above the actual ground.
The cast was simplified from the 100's of extras, LOL. Here you see the carpet in the uncompleted set.
Fairbanks was at the top of his physical form, and he played the 'thief' as a lovable, athletic, rascal who falls in love with the Princess.
The Princess was captured by an evil Mongol Prince who wanted to marry her for her kingdom.
The evil Mongol Prince is actually Lynn Manuel Miranda from Mary Poppins that I found in a thrift store. I adapted this outfit and made leggings to match.
A guard complete with leather boots makes sure he does no more damage as the Thief and Princess escape on the flying carpet.
Another matching guard (makeup over the top-1920's style) and the evil Handmaiden to the Princess. I tried to duplicate the spirit of their costumes, without knowing colors. Also conscious of how this would photograph in black and white.
Fairbanks does look like a rascal--and his trademark blue eyes.  The princess's outfit is cobbled from thrift finds and I sewed her top with turquoise underneath and the gold fabric of her headgear.
In lieu of having all the extras, I added an extra female, and and old man at his marketplace stall.
They are dressed with attention to texture and muted pattern. 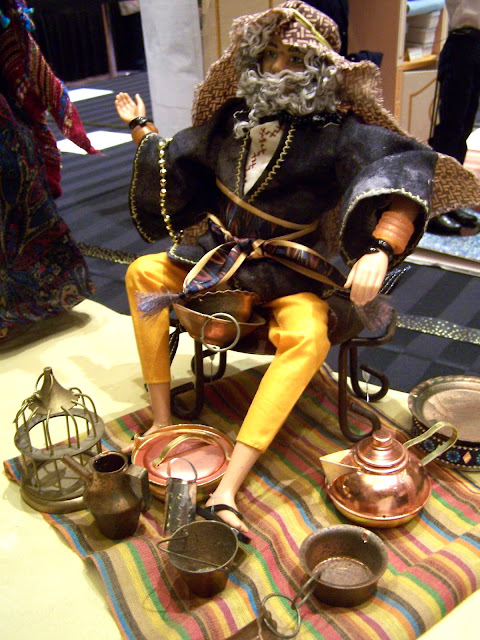 Our market old man has his collection of metal pots out to sell, when he sees the Thief and Princess escape.
Here is my installed display in the competition room. The display was very light weight made of insulation foam, cardboard, foam pieces and two pieces of wood for stabilizing! Lots of pegs, wire and fishing line.
Shots taken during setup in my work room.
The art deco style and decoration was made with lace/fabric, stencils and bits of wood trim. I will do specific 'how-to's' in a few tutorials. UPSIDE, the entire thing and dolls weighed not more than 10 pounds.
Mixing three dimensional pieces and the flat painted background added depth. I knew that the room for displaying would be large, so everything was designed to cast shadows to add visual depth to my limited space.
I also worked with a limited palette of paints: white, ochre, black and silver and gold, the sky was blue/black and white. The large tower to the right was a combination of many elements: cardboard, plastic sewer pipe, foam, plastic pieces, styrofoam, fabric, lace, and a crochet-piece.
This building is actually a piece of foam with contact paper, with the arch painted on. The corbels are little blocks of foam covered in modge-podge and tissue and multiple layers of paints.
The side piece of wood--1x6 is faced with an art deco pattern you might see in a theatre of the 1920's. This side was in gold tones,
The other side was done in gray silver. Slotted into the base, the boards were pegged, these two pieces were key to stability and a place to anchor the lines to the flying carpet. The golds and silvers were subtle and dry-brushed on here and there.
Not just a focal point---this center piece tower anchors the two background flat pieces with wire at the neck and at the bottom base.
The back sides were painted with a desert landscape with the same colors used in the design.
An old sheet was modge-podged on all the foam surfaces to give a great base for painting and decorating.
Here you can see the movie's 1924 harness and the flying carpet, high above the crowd.  The actual crane is visible in the upper left. It had to be scary hanging high above the crowd and really moving. A tower with cameras caught the movement as the carpet was swung across the front of the city set.
More inspiration....look at this set's scale and the tiny people at the entrance to the city!
Really amazing!
My diorama took a first place in my category. It was so much fun, and I will bore you death with the how-to's in later posts!
Here a few stills from the actual movie from a multitude of online sources as well as screen shots photos from the actual movie on my computer.
The Mongol Prince and evil handmaiden.
Fairbanks and Julanne (the Princess)
Carpet flying up a huge stairway.
When they first meet and he offers back what he stole from her! 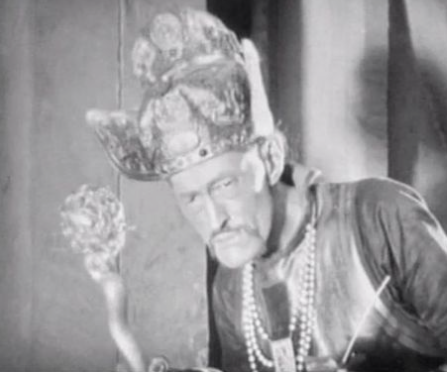 internet photo
The evil Mongol Prince in one of his many outfits!
The all beaded costume of the handmaiden! (This is before the censors started in on the movies.) 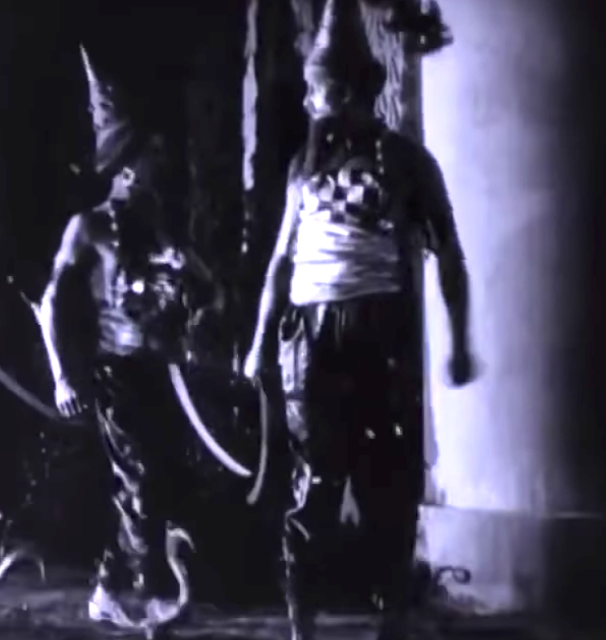 TCM
The guard headdress was over the top with a long dangling??? hanging from the peak.
The Magic Carpet in actual flight---hang on!
This was so much fun to do,  now where can I set it up, yikes I'm running out of room for sure! Here's the info sheet I put up on the outside 'marquee' wall of the display.
There were many other special effects in the movie including an underwater scene, giant spiders, a flying horse. The movie itself is quite the treat.
Any questions, inquiries are welcome!
If you enjoyed this post(s), please join me by email- at
FOLLOW IT---upper right hand corner.
I have not been paid or reimbursed in anyway for my opinions or products shown, or from where I shop.
Please Join me at these Fine Blog Parties!
Please do not use my photos without linking back to this blog without my permission. 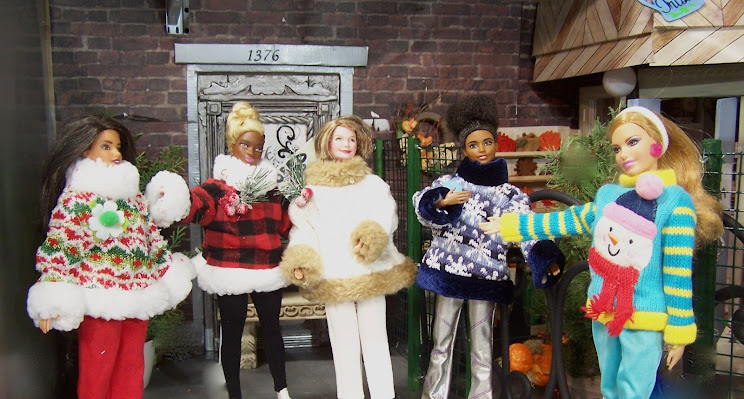